The Little Man
by Victoria Nations

There’s a little man
crouching by the fence past the stop sign.
He’s bald and wearing a shapeless coat,
and he reminds me of Uncle Fester,
but he’s grinning a little too wide.
His teeth are very long.
And he looks much too menacing to be an Addams.

He’s shaking the split rail fence.
Maybe he’s trying to pry one of the boards off,
though it would be easy enough to crawl over
or even through the fence.
But perhaps he’s just doing it to get my attention.
He’s catching my eye, and he’s grinning wider now.
And he’s pulling the fence with greater force.

He pauses for a moment and looks to see if I’m reacting.
I’m trying to hold my face still.
I’m trying to look as if I’m not watching him.
And I’m wishing that I could drive past him faster.
He’s obviously tracking me. He knows what I’m doing.
His head swivels around, and his smile is wider.
I can see the gums above his teeth.

I lose him in my blind spot as I pass closest to him.
When I look in the rearview mirror,
he’s not at the fence anymore.
The board is still in place.
I can’t see him anymore,
and it’s worse than watching him follow me.
I wonder how fast he can move, or jump.

I think about him clinging to the roof,
his face raised to the wind.
It’s causing his lips to pull back from those long teeth.
I think about him waiting there.
He’s waiting for me to get farther down the road.
I hear his grip shift on the roof, before trying to pry it off.

May you find only the best bio-exorcists along your trail today.

You can visit Betel…oops, better stop…and other legendary ghosts along the Seminole Wekiva Trail, painted by John Demshock. To quote Delia Deetz, “This is my art, and it is dangerous. You think I want to die like this?”

Dr. Paul Bearer was the host of Creature Feature, a self-declared “horrible old movie” double-feature that aired in the 1970’s and 80’s in the Tampa area.  In my memory, I’m laying on a floor pillow on orange carpet, in the living room of our family cabin, and watching Attack of the Mushroom People with him on a Saturday afternoon.

At commercial breaks, Dr. Paul Bearer brought out ridiculous props and made amazing puns, like his box of “Kellogg’s Mourn Flakes” cereal.  He pretended to play Poisoning Pigeons in the Park by Tom Lehrer on his grand piano.  He was brilliant.

Doll of found objects
Fabric from her dress, a tooth
The last stitch pulled tight

I grew up reading Edgar Allan Poe and H.P. Lovecraft, and I still adore them. Some day their language is overblown, but I love how their lavish descriptions overwhelm me. Their stories are more horrifying for how they make me feel crushed beneath moldering walls and surrounded by alien angles.  Something monstrous is usually threatening to overtake their narrators, and I hold my breath waiting for it to come.

One of the presentations by Sidney Williams at the Florida Writers Conference was on quiet horror, those stories with a feeling of creeping terror.  It’s the form of horror fiction that I love to write (and read).  I want a reader to sense something is off, something wrong is happening. They’ll sense something is waiting for them to come closer, but they won’t be able to identify it in time. The unknown, the inability to escape, will make it even scarier.

Two of my favorite sessions at the Florida Writers Conference were today.  I spent the morning delving in to how characters respond to supernatural elements and geeking out over writing horror so it fills a reader with dread.

But there was time this afternoon to check off a Halloween task: pumpkins!  They were so bright, so huge, and in all different shapes.  These will be very good jack-o-lanterns.

The Florida Writers Conference will be wrapping up tomorrow, and I’ll be doing a blog post soon on the wonderful insights into writing about monsters from one of the talks.  For now, I’ll pretend I’ve got some Halloween cereal in my room for a late night snack.

It is an amazing feeling to write a scene, even a sentence, that gives you a little thrill.  I enjoy writing spooky stuff, and those thrills come when I feel like I’ve written a scene that is particularly gruesome or I’ve managed to capture a character’s reaction to the horrific thing that is happening.  It makes me pull away from the keyboard and make delighted spirit fingers.

If I describe my excitement to someone who doesn’t write, they often look puzzled.  From the outside, I’m just someone sitting at a computer who suddenly gets giddy for no apparent reason.  If only they could see the events that are happening in my head!

That’s one of the important things about writing conferences for me.  When I talk about that feeling to other writers, they get it.  They get excited along with me, and they share their experiences with writing a delicious scene that defined their character or the make-believe world they are creating.

The motto of the Florida Writers Association is “Writers Helping Writers,” and the  Florida Writers Conference is this weekend.  The panels cover topics from the craft of writing and the writing life, to the business of representation and publishing.  One my favorite events is the daily Genre Breakfast.  If you come to the conference, come sit with me and the other speculative fiction writers, and we’ll talk about how to make our fantastic worlds seem “real.”

When I was a teenager, my family lived in a farmhouse built before the Civil War.  Rooms had been added on as the family grew and the kitchen was moved inside.  It was a large and simple – the opposite of an antebellum manse – with a few oddly offset rooms.    It was a perfect house to host Halloween sleepovers.

The evenings started with a formal dinner downstairs.  Then the girls and I headed upstairs, where my parents had helped me dye the bedding gray and make cardboard tombstones to put at the head of each of their mattresses.  We watched horror movies on VHS tapes and scared each other.  Sometimes there were other things hidden around upstairs to startle if they left the room. 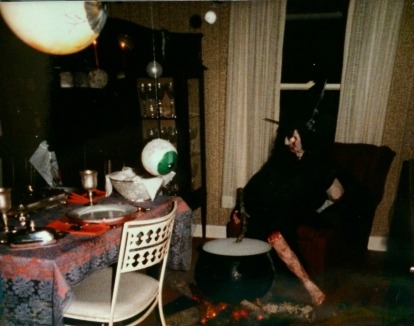 These photos are from 1984, when the theme was “eyeballs.”  My parents bought balls of all different sizes and we painted them for weeks.  Cecilia, a papier mache corpse from the year before, came back as a witch for this party.  She had started as “Cecil the Severed Leg,” but it just wasn’t enough.

The house is gone now.  It burned down several years after my family moved away.  It’s too bad to think I can’t go back to visit it.  There were people that swore there were “haints” in that house, but they differed on whether they felt benevolent ghosts or darker entities.

Member and writer The Midnight Society